Every four years we have another Olympics and just like millions of fans all over the world I look forward to watching as the gymnasts amaze us all when they once again raise gymnastics to yet another level of excellence. As a gymnastics coach, it is impossible for me not to also remember a particular Olympics back in 1992, when I was very proud of one very special little girl.

Her name is Kim Kelly, and today she is happily married and has two children. In 1992 I sat in the arena in Baltimore and watched with my own family, as Kim thrilled us all by qualifying for the 1992 Olympic Team. But that was just part of her story.
Many years earlier I was running a Gymnastics Program and Kim’s sisters were on my competitive team. They were talented kids and I became friends with the family, as I did with most of the parents. Each week when Stephanie, her mother, would bring the kids to the gym, I noticed a shy little girl hiding behind her mother. I teased and coaxed her each week trying to get her to leave her mother’s side, but she clung to Stephanie’s skirt.

Finally after weeks of encouragement from mom and me, we finally got her out on the gym floor. Kim took to gymnastics like a fish to water. At the time she was only about 4 or 5 years old, but she was soon outshining gymnasts twice her age. After training her for only a short while I felt compelled to write her mother a note. As best I remember, I basically told her mom that Kim had very serious talent, and if she kept her in gymnastics, Kim could someday be a real champion. Well, Stephanie just giggled and said that I was being nice. She told me that I was maybe exaggerating a little. I assured her emphatically that I was not, and soon Kim began to train with my team gymnasts.

Of course she continued to outshine the other gymnasts who often towered over her in size and age, but not in skill. One story that I remember very clearly, that I am sure Kim does not recall because she was only about 6 years old at the time, was when I was teaching her a glide kip on the bars. A kip is probably the first “difficult” bar skill that a developing gymnast learns. It involves many aspects including strength, timing, and swing. The taller and older girls in her group, including her sister, were moving forward in their mastery of the glide kip, and a few even were able to do it themselves, jumping from the floor behind the bars and swinging up above the lower rail. It really is a challenging skill when you are starting out, as any gymnast will tell you.

When it was Kim’s turn she insisted she would do it by herself. I laughed out loud as she was so little she could not even reach the bar without my help, so there was obviously no way she could jump into the swing alone. She got a very stern look on her little face, and I couldn’t stand looking at her disappointment, so I agreed to let her try. She refused to jump from a spot block, so I simply lifted her to the bar where she rested in a hanging position, and then to my total surprise, using no swing at all she muscled her little body up into the final support position above the bar. It almost defied physics.

After a few years I moved my program to Broomall, and she moved on to Reading where she was trained by a very good gymnastics coach, and to the delight of everyone, she participated in the 1992 Olympic Trials in Baltimore where she qualified for the Olympic Team. Kim found herself very quickly in the middle of one of the biggest controversies in sports history. The story is a difficult one for me to discuss, so let me just say that in the end Kim was replaced by a gymnast who was not even a participant in the Olympic trials, as the result of a recent rule change. It was a devastating event for Kim, but she has handled it with more dignity and grace than I have seen from any other athlete. I was never more proud of one of my former students than I was of Kim.

Shortly after that Kim came and worked for me at my gym in Broomall for a while, and even trained my daughter. It’s always nice in gymnastics seeing the skills passed from one generation of coaches to the next generation of kids. One afternoon after teaching together we were talking about the old days and she said, “You know my mom kept that note you wrote her.” For a moment I was confused, and then she explained, “The note you gave her when I was little. She pasted it to the first page of my scrapbook and I still have it!” As a coach, and a teacher, you live for moments like that one.

Kehler’s Gymnastics Center is still located in Broomall, where hundreds of children from 15 months to 18 years train for gymnastics. 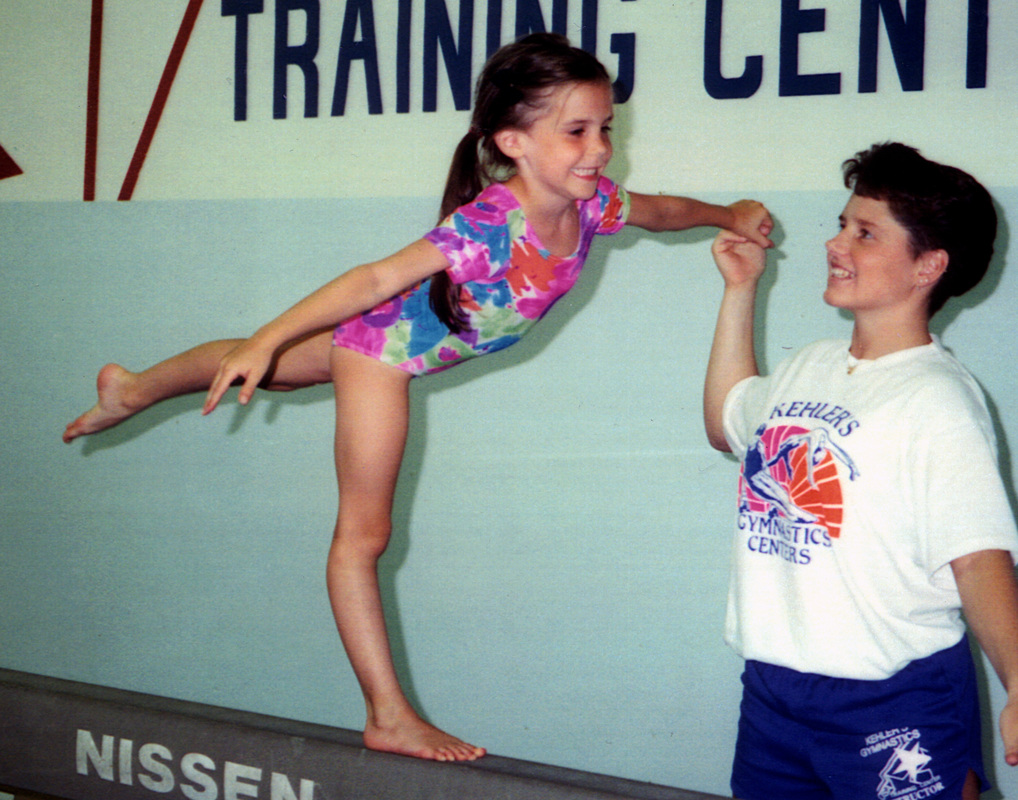 ©2014 KGC Inc. All rights reserved.This page and/or any part may not be duplicated without express written permission. TUMBLE TYKES is a registered Service Mark.